I've just read this recent news article, Astronomers Have Located The Centre of The Solar System to Within 100 Metres, reporting on a paper[1] that claims narrowing the Solar System barycentre to within 100 meters, just outside the sun, and I wonder, could this result help prove or disprove the hypothesis of a massive Planet Nine as proposed by Batygin and Brown[2] in 2016?

I imagine that any unknown mass concentration would change the barycentre and generate a error, and if we could measure this error, it should be possible to pinpoint the position of said mass concentration. Can we just use probe tracking data from the Voyagers or Pioneers to see if their hyperbolic trajectories match the barycentre reported in the paper, for example?

Short answer is no, it can't prove or disprove the existence of Planet 9. Even if there is a significant difference between the barycenter of the solar system with and without Planet 9 we wouldn't be able to tell without hundreds if not thousands of years of precise data. If we don't have Planet 9 as a reference and are limited to the Sun and the eight known planets for reference then without another reference in the same frame we have no way to observe the motion of our reference.

It is perhaps useful to consider the solar system (i.e. the Sun plus the eight known planets) as orbiting together around the barycenter of the solar system plus Planet 9 system. Without seeing Planet 9 as a reference how would we have any notion that this other barycenter even exists?

Rigorously answering this requires answering several separate questions (some which aren't necessarily relevant in answering the broader question but do provide useful background):

1 - Location of the barycenter over time

The short answer to question 1 is yes (sort of). There is information on the orbits of the contributing masses which can be backed out from simple analysis of the location of the barycenter over time.

The emphasis here is because at any given point in time the location of the barycenter contains no information about the location of individual bodies, only the entire mass distribution. However, since most of the mass in the solar system is discretized into large bodies (as opposed to a gas or dust cloud, protoplanetary disk, etc), the influence of each massive body on the location of the barycenter will vary with a frequency proportional to its orbital period -- and, critically, this is fairly measurable (but only if we can also know the relative positions of the bodies). Consequently, the influence of the individual masses can be retrieved (this is not necessarily the case for gas or dust clouds and protoplanetary disks).

In a simple system, retrieving information about the orbits is fairly straightforward (although I will neglect the rigorous demonstration for brevity). The issues arise when the system becomes more complicated.

Another significant challenge is the qualification that the barycenter must be observed over time, and more specifically how much time is needed to deconvolve the various influences. As I mentioned, each body's influence on the barycenter is cyclic based on their orbital period and eccentricity. Using the Bulirsch-Stoer integrator from Vulcan and tracking an energy analog of the barycenter's motion1 as a function of time we can analyze the effect of the different orbital frequencies.

Let's consider a three body system of the Sun, Saturn, and Jupiter. In this system the influence of Saturn and Jupiter should clearly be visible in the resulting sinusoid. After integrating this system for $2$ Saturn years ($60$ Earth years) the energy-analogy over time looks like this: 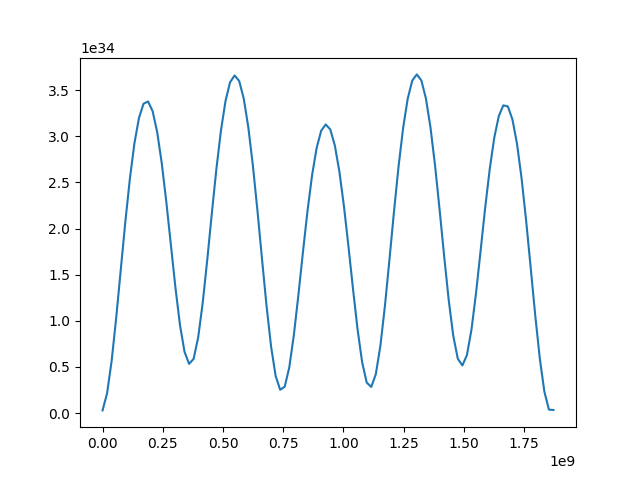 It should be pretty clear that the above behavior can be created by two sinusoids with different frequencies, to any who find this unclear I recommend having a look at this tool. If wanted to we could use Fourier analysis to deconvolve those two frequencies and recover the orbital periods of Jupiter and Saturn (I will also neglect this for brevity).

Let's consider a slightly worse case: a three body system comprised of the Sun, Jupiter, and a hypothetical hot jupiter with a semi-major axis of $1.55^{}$x$10^{10}$ m on a relatively circular orbit. Our energy-analog after $3$ hot-jupiter years ($12$ Earth days) looks like this: 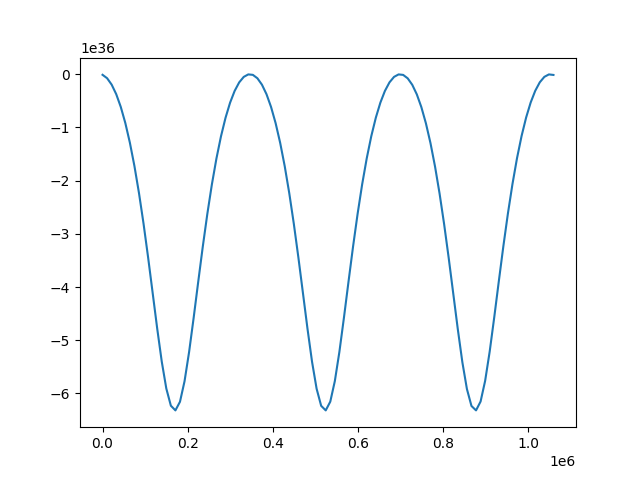 Where did the other sinusoid go? 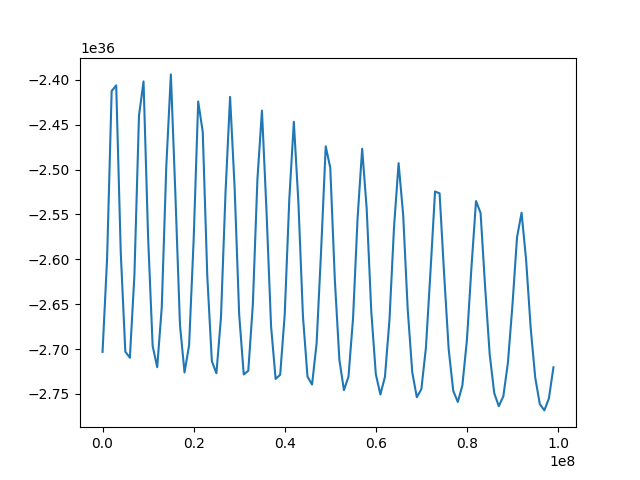 This becomes even more complicated with non-zero eccentricities and unstable orbits. For a similar three body, hot-jupiter system but with the toy Jupiter having an eccentricity of $0.65$ over a period of $7$ Earth years the energy-analog is:3 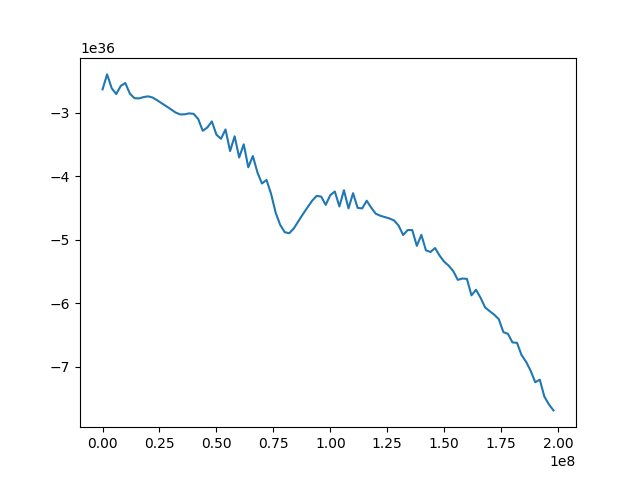 There are other ways to draw inferences about the orbital parameters from the relative motion of the barycenter (e.g. the shape of individual cycles), but that is for a different question.

In sum, the location of the barycenter over time could certainly be used to find a mass imbalance, but but not necessarily argue for the existence of Planet 9 -- that would depend on the specifics of the observations.

There are number of significant barriers to accurately calculating the barycenter of the solar system but the most troublesome are the uncertainties regarding the interiors of Saturn and Jupiter. Specifically, the behavior of liquid metallic hydrogen at such massive pressures and (more so for Saturn) understanding their gravitational moments (Fortney 2004).

The issue this raises is that without knowing the centers of mass for Jupiter and Saturn (which contain 92% of planetary mass in the solar system) with sufficient precision we don't know well enough what the solar system barycenter should be to determine whether or not the true barycenter differs enough to indicate the existence of Planet 9.

With information from the Cassini spacecraft combined with data from the VLBA radio telescope the Saturn ephemerides was constrained to $4$ km in 2015. This represented an improvement of about an order of magnitude. The Juno spacecraft provided a similar improvement to the Jupiter ephemerides, constraining it to within $10$ km in 2019.

So assuming Saturn's center of mass has not drifted much since September of 2018, I would estimate the precision of the calculated solar system barycenter to be roughly $\pm15$ m.

Calculating the effect Planet 9 would have on the barycenter is actually quite trivial thanks to superposition (see this answer for a more rigorous treatment of the limitations of this concept when it comes to gravitational interactions). The equation for calculating the distance from the primary body to the barycenter in a two-body system,

as a lower bound, and

Even the lower bound of $4\text{x}10^{8}$ m is a huge deviation, so did we just demonstrate that Planet 9 can't exist? Unfortunately no. This goes back to number 1 - the problem is time. There are a number of ways to think about this, but the salient point is that the influence on the barycenter of the solar system would have been persistent since well before the earliest observational records. Planet 9 would have to have an orbital period on the order of $10,000$ years. Over periods of thousands of years it would have obvious and readily measurable effects on the motion of the other planets (and that motion would be reflected in the motion of the heliocentric barycenter), but otherwise the effects are simply too small to disambiguate from noise.

1 I create this analog by calculating a hypothetical energy of the system if the center of the sun was the barycenter of the system and comparing it to the initial value. It is not tremendously physically meaningful but it does reduce the parameter-space of the temporal position of the barycenter to two dimensions, thereby making it easier to show the effect I discuss graphically.

2 This is one of the reasons simulating hot jupiters is so difficult (and one of the things the Vulcan project is intended to remedy): the limiting factor for orbital integration is always the fastest-orbiting body (although multi-step integrators mitigate this somewhat) so systems with large differences between orbital periods take proportionally longer to simulate. Using the Mercury code, a gigayear solar system simulation with a hot-jupiter on an 8 day orbit would require roughly 10 months of simulation time on a high-end desktop computer.

3 Note that the energy analog is degenerate here because the hot-jupiter will be ejected after approximately 10 Earth years.

4 These uncertainty relationships are from my own calculations and may be flawed as they have not been rigorously tested or reviewed.

5 And I do literally mean all the mass. As in all the mass in the universe, gravity has an infinite range after all....

Not the answer you're looking for? Browse other questions tagged planet solar-system orbital-mechanics 9th-planet space-probe .

13
Is it at all possible for the sun to revolve around as many barycenters as we have planets in our solar system?
8
If the hypothesized planet behind the Kuiper belt existed, would it have a barycenter outside the Sun?
5
Where is the Solar system's barycenter located?