What is the underlying nature of the dark spot found on Uranus?

What is the nature of bright spots found on Uranus? actually quotes Space.com's Uranus Has a Dark Spot which says:

During the past decade, many bright spots have been seen on Uranus in both red and near-infrared filters. But this is the first dark spot ever seen on the planet.

Question: So I'd like to know if there is any science-based thinking on the underlying nature of the dark spot on Uranus beyond "it looks dark, like the ones on Neptune". Has this all been sorted out or is it still mostly a mystery?

Wikipedia's Climate of Uranus; Uranus Dark Spot gives a lot of descriptive information and relates the spot to similar things seen on Neptune, and describes some speculation, but this article does not seem explain much. 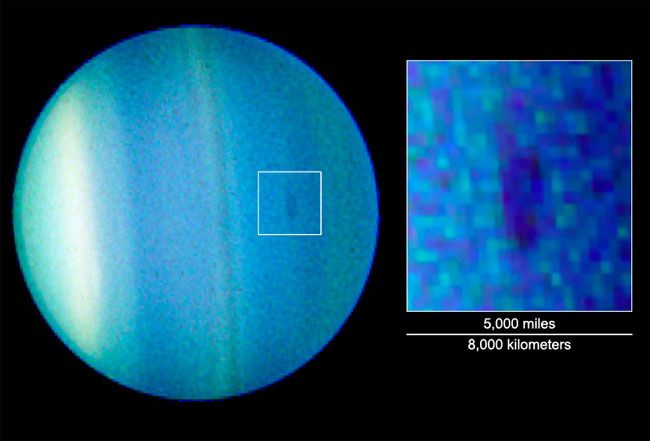 Just as we near the end of the hurricane season in the Atlantic Ocean, winds whirl and clouds churn 2 billion miles away in the atmosphere of Uranus, forming a dark vortex large enough to engulf two-thirds of the United States. (Image credit: NASA, ESA, L. Sromovsky and P. Fry / University of Wisconsin)

There is a science-based approach to explaining the dark spot on Uranus. In 2009 (the image and sighting of the spot in question are from 2006) a paper was published titled: The Dark Spot in the atmosphere of Uranus in 2006: Discovery, description, and dynamical simulations by H.B. Hammel a, L.A. Sromovsky et. al..

In this work they say that the dark spot is a wind vortex. Quoting the paper:

Regardless of how it is computed, the dark features's zonal velocity is higher than all other velocities measured to date near that latitude.

Using computer simulations they are able to predict possible initial velocities, lifespan of the Vortex, center latitude of the initial and center latitude when it reached the end of its lifespan. They go further and state that the mere existence of the vortex shows the dynamic and evolving seasonal nature of Uranus's atmosphere.

So I'd like to know if there is any science-based thinking on the underlying nature of the dark spot on Uranus beyond "it looks dark, like the ones on Neptune".

The abstract explains that the spot has a markedly different spectral character than the one on Neptune:

The dark feature's contrast and extent varied as a function of wavelength, with largest negative contrast occurring at a surprisingly long wavelength when compared with Neptune's dark features: the Uranus feature was detected out to 1.6 μm with a contrast of −0.07, but it was undetectable at 0.467 μm; the Neptune GDS seen by Voyager exhibited its most prominent contrast of −0.12 at 0.48 μm, and was undetectable longward of 0.7 μm. Computational fluid dynamic simulations of the dark feature on Uranus suggest that structure in the zonal wind profile may be a critical factor in the emergence of large sustained

6
What is the nature of bright spots found on Uranus?

27
What is the accepted theory as to why Uranus' axis is tilted so severely?
4
Before Voyager 2, what were the highest quality photos of Uranus and Neptune?
3
What kind of effects can maintain Uranus' rings' eccentricities?
4
What causes the strong winds on Uranus?
6
What is the nature of bright spots found on Uranus?
2
What does the amino acid found in the atmosphere of Venus mean?
6
How does the Hubble Space Telescope measure the speed of the wind inside Jupiter's Great Red Spot?