Are there any gaps in the range of gravitational wave frequencies we can detect?

We have LIGO and other earth-based interferometers for detecting high-frequency gravitational waves, we're going to have satellites in orbit around the sun for low-frequency waves, and we have a pulsar timing array for very low frequency waves. Are there any wavelengths in between the ranges of these different detectors that we wouldn't be able to detect?

Are there any wavelengths in between the ranges of these different detectors that we wouldn't be able to detect?

This is shown by the sensitivity curves of various detectors in the figure below from this paper which makes the science case for aTianGO, where the curve for LISA is purple, the curve for aLIGO is orange ($\gtrsim 10$ Hz), and the curve for aTianGO is red. The nanohertz observatories are off of this figure to the left, and are known as pulsar timing arrays, such as NANOGrav. 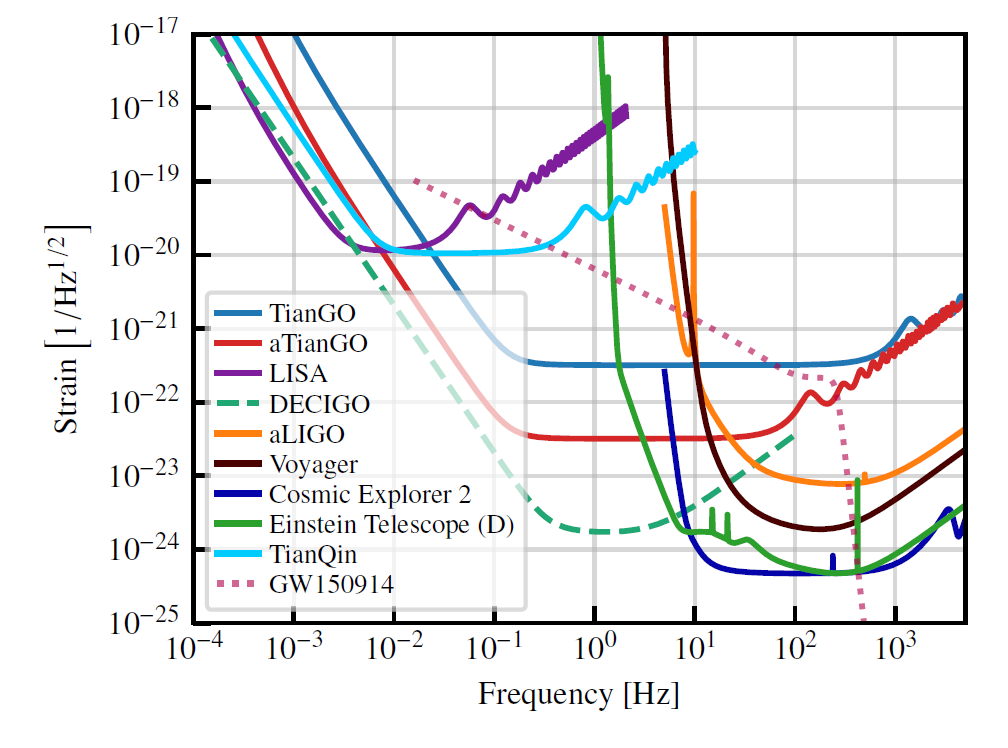 Ground-based observatories are not sensitive below the seismic wall at ~10 Hz (though, in the future, this may not be such a problem if they are able to implement real-time feedback seismic detectors in the areas surrounding the g-wave detectors). The decihertz detectors, such as aTianGO and DECIGO, will help to compliment the ground-based detectors in terms of sky localization of sources (crucial for constraining the Hubble parameter), and for the early warning of binary black hole merger events, since the peak sensitivity of these detectors is below the seismic wall, as they are space-based detectors. The Einstein Telescope is a proposed ground-based observatory that would have a triangle geometry like LISA, rather than the L-shaped geometry of LIGO/Virgo, and arms that are a bit more than twice as long as LIGO's.

This paper by Loeb and Moaz (2015) proposes using a network of atomic clocks to detect the effect of gravitational time dilation due to a passing gravitational wave, which would be relevant in the millihertz band as well.

The plot below represents (roughly speaking) the minimum detectable strain measurable as a function of frequency.

Whether there are gaps between these three instruments depends on what you mean by a gap. There is some sensitivity in the overlaps, but that sensitivity is 2-3 orders of magnitude lower than the peak sensitivity. Thus $10^{-7}$ - $10^{-5}$ Hz looks poorly covered as does $0.1$ - $10$ Hz. The latter will to some extent be improved by new ground-based technology such as the Einstein Telescope. 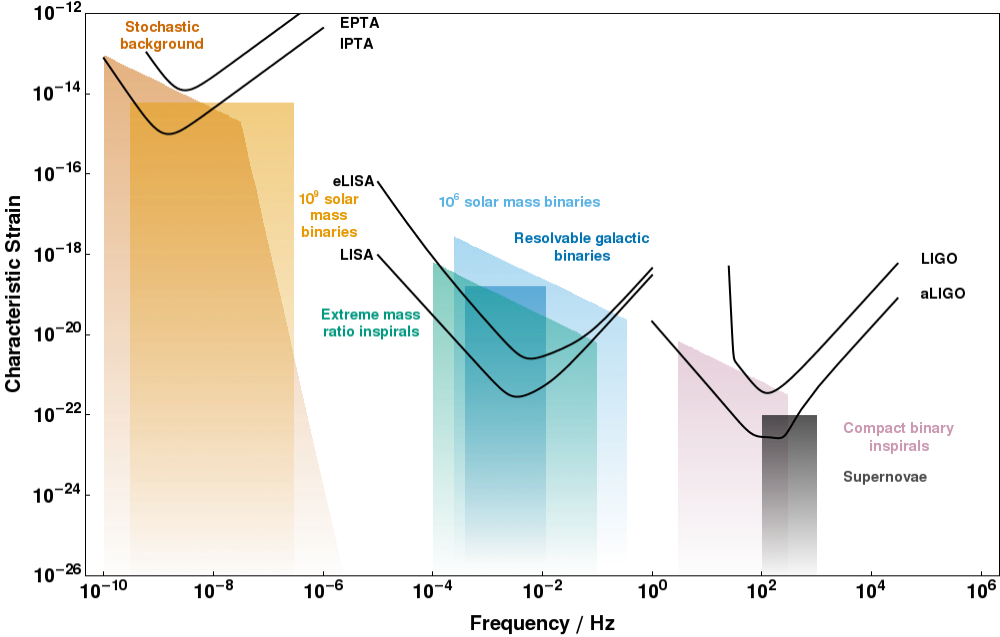 Not the answer you're looking for? Browse other questions tagged observational-astronomy gravitational-waves .

4
What would a kHz gravitational wave detector look like? (mountains on millisecond magnetars) How would it differ from LIGO/Virgo?
5
Expected nature of LISA's data; will it be more like a forest of static peaks, or a series of individual events?
4
What produces gravitational waves with "periods between about 100 - 8000 seconds"?
3
Which things can LIGO see that LISA can't, and vice-versa?