How did Parker Solar Probe take what looks like 2D cross-sections of the solar wind in photographs; high contrast streaks in focus from volume effect?

The new NASA Goddard video NASA's Parker Solar Probe Touches The Sun For The First Time shows what looks like they might be photographs of the solar wind.

I'm having a hard time understanding how such clear 2D images can be taken of a 3D volume effect. I see high contrast bright and dark streaks and other structures as if a 2D slide was taken, but the camera doesn't have a narrow depth of focus on large scales and I assume these are kilometer or larger structures.

So I'm confused by these images.

Question: How did Parker Solar Probe take what looks like 2D cross-sections of the solar wind in photographs? How can we see high contrast streaks "in focus" from a presumably volume effect? 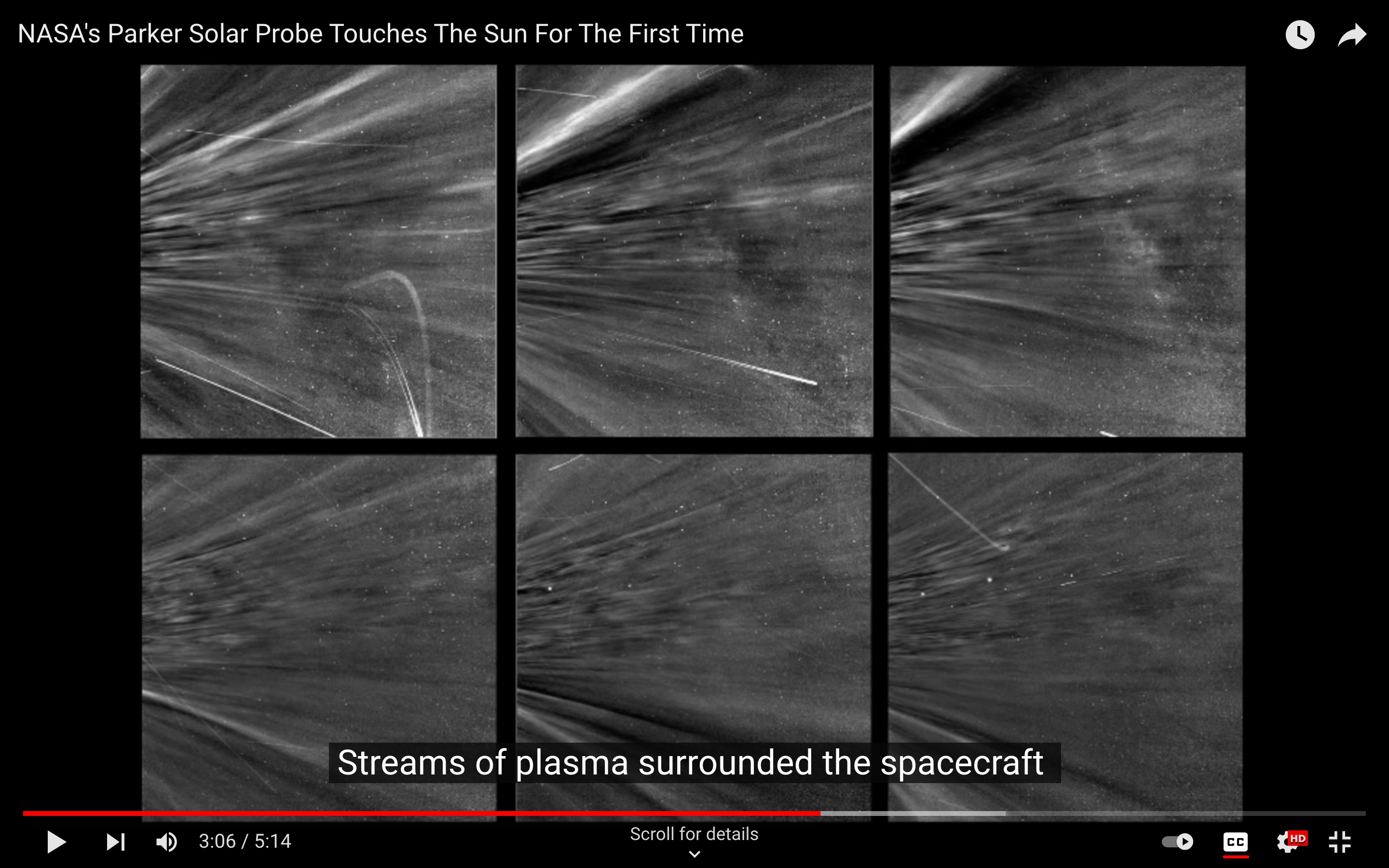 The WISPR instrument is a visible light imager. You're right that it doesn't have a narrow depth of focus; it is basically focused at infinity. The video says we are seeing streams of plasma. The actual structures of these streamers are roughly parallel tubes projecting outward from the Sun, like a handful of dry spaghetti. We are seeing visible sunlight, shining onto the streamers and getting Thompson-scattered back to WISPR.

So the image shows a collection of these streamers, some close to the spacecraft (appearing broad and more diffuse) as well as farther away (appearing thinner). This NASA page gives some more info about the spacecraft's passage by the streamers that are shown in the still from the video you posted.

My guess is that you get the 2D effect from streamers appearing at the right distance: streamers too close appear blurred and uniform, while streamers too far are blended together into a uniform background. An analogy would be when you're in a snowstorm, and you can perceive snowflakes falling at an ideal distance away from you.

I was intrigued by the "curved spaghetti" artifact in the upper left panel of the still frame, so after watching a similar but more science-packed NASA video on Parker results, I talked to an outreach specialist from NASA Goddard. She was able to pass along the following explanation from a solar scientist on the Parker Solar Probe mission:

The curved streaks at 3:06 in this movie look like many of the other impact ejecta we see when a dust particle hits the spacecraft and ablates material. We can't state definitively what the origin of any particular streak is, but it is highly likely that this curved streak is an impact ejecta particle. The diffuse appearance of the streak is likely because it is close to WISPR (thus out of focus).

I had assumed that the very-straight thin lines in the images were direct cosmic ray hits on the detectors, like what we see with space telescope data. I was astounded to realize that this is "ablation," or bits of the spacecraft shielding being knocked into space and flying away (after collisions with interplanetary dust). The NRL page and the Space Science Reviews paper say that CMOS was selected over CCD for these detectors because they are more robust to damage from dust and high-energy particles... Now I see why!

Not the answer you're looking for? Browse other questions tagged the-sun photography stellar-astrophysics solar-wind parker-solar-probe .

5
Gallery of 'actual images' from space?
8
What is the origin of the dust near the sun?
1
How to photograph Saturn
5
Why does the solar wind switch to flowing straight by the time it reaches Earth?
7
Has Hubble photographed Venus in near IR? If so how does it compare to the new and exciting Parker Solar Probe image?
9
The Sun's Alfvén critical surface; what was known about its existence and location before Parker Solar Probe "touched the Sun"?