A friend and I did some work on exoplanets with the help of a research institute (IEEC in Spain) for a major high school project. What we did was to "redetect" the exoplanet XO-6b through the transit method. This is the scientific paper of the official discovery https://arxiv.org/pdf/1612.02776.pdf . With the data and information provided we could only extract the flux-time curve and with it calculate the radius of the planet. Once the radius was calculated, we wanted to go further and know more characteristics of the planet such as mass, period, distance to its star... What happened is that we needed the mass and we discovered that the most natural way to calculate it was through the method of radial velocities to which we did not have access. What we decided to do was to look in books and we found the following formula that approximated the mass of the planet:

The problem with this formula is that it is imprecise and the result is not satisfactory as it is not within the range of the official finding which is M XO-6b = 1.9 ±0.5 MJ. Our result was 2.48 MJ (Masses of jupiter). Considering that our radius calculation already deviated a bit from the official one it is not a bad approximation but I would like to know if there is a more correct way to calculate the mass just knowing the radius and having the flux-time curve. With the mass we wanted to calculate other variables like the orbital period or the semi-major axis but the results deviated a lot.

No, there is not. The transit method can only give you the radius of the planet (unless there are multiple planets in the system, in which case there is a method that uses "transit timing variations" that cannot be applied in your case I think).

What your approximate formula does is to assume some relationship between the mass of a planet and its density (or equivalently, between the radius of a planet and its density). It is probable that this formula is empirically derived from measurements of exoplanets that have both a mass and a radius. But that relationship will have considerable scatter, because it seems clear that exoplanets have a diversity of internal structure and composition, even at the same mass.

Even worse, once you get up to Jupiter-mass exoplanets, they all have a very similar radius (to within a factor two) for a broad range of masses. So trying to determine an exact mass from the radius is impossible.

The plot below of mass vs radius for exoplanets (from Santerne et al. 2013) where both parameters have been measured, should illustrate the problem. 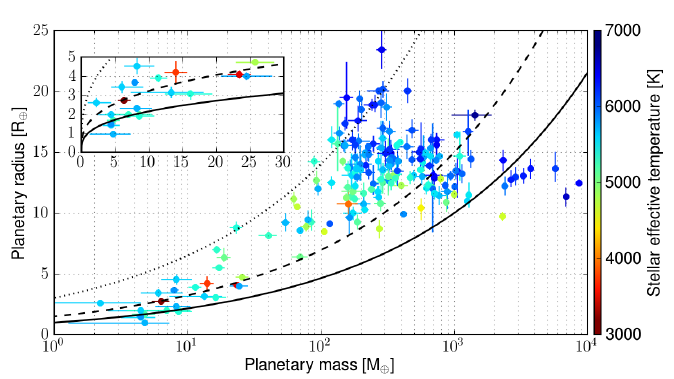 If I'm reading your question correctly, the transit gave a radius of 25.5 Earth radii. Looking at the plot above you can see this is a complete outlier. Only a handful of giant exoplanets are as large as this and it is probably due to them being very close to their host stars and being heated by it. If this was the only information you had, you could probably only argue that your "planet" was more massive than about 0.3 M_J and in fact has a radius that would be more appropriate for a brown dwarf or a small star.

Note that orbital period is just the time gap between adjacent transits in the light curve and that the semi-major axis can then be derived from Kepler's third law under the reasonable assumption that the mass of the planet is much less than the mass of the star.

Not the answer you're looking for? Browse other questions tagged planet exoplanet mass mathematics planetary-transits .

12
How to calculate the expected surface temperature of a planet
1
gravitational energy and internal energy
0
Doppler Spectroscopy - Finding mass of an exoplanet
3
How to Calculate Planetary Equilibrium Temperature in Binary systems
3
Is this a potential planetary setup for the Alpha Centauri System?
0
Calculate mass of exoplanet from transit method
5
What is the (overall) half-mass radius of Milky Way