How did UV from the earliest stars 'alter the state of the 21 cm line' such that it shows up in CMB today?

In this question I discuss the recent (open access) paper in Nature An absorption profile centred at 78 megahertz in the sky-averaged spectrum at length. The abstract begins:

After stars formed in the early Universe, their ultraviolet light is expected, eventually, to have penetrated the primordial hydrogen gas and altered the excitation state of its 21-centimetre hyperfine line. This alteration would cause the gas to absorb photons from the cosmic microwave background, producing a spectral distortion that should be observable today at radio frequencies of less than 200 megahertz(1).

where reference 1 is Jonathan Pritchard and Abraham Loeb (2012) 21 cm cosmology in the 21st century. From there I've found Leonid Chuzhoy and Zheng Zheng (2007) Radiative Transfer Effect on Ultraviolet Pumping of the 21 cm Line in the High-Redshift Universe.

I understand some basics about the hyperfine transition in hydrogen, and that the "spin temperature" of a gas in space can differ from the temperature of other partitions if it's being pumped, but these papers are more than a bit hard to read.

Is there a simple way to explain the basics behind how the exposure of hydrogen to the UV light produced in early stars would cause the "blip" in the (now red-shifted) 21 cm part of the Cosmic Microwave Background radiation spectrum we see today?

The Intergalactic medium at the relevant redshift is made of neutral hydrogen. What we can measure is the brightness temperature (the temperature that the IGM would have if it emitted as a blackbody) relative to the CMB. This quantity depends crucially on the following expression:

where $T_S$ is called spin temperature.

The spin temperature is just a measure of the ratio between the number of hydrogen atoms in the first excited hyperfine state (spin parallel) and ground state (spin antiparallel). It turns out that the spin temperature can be modified in three ways: one of them is Lyman resonant scattering (the other two are collisional coupling and scattering of CMB photons). Using atomic physics it's not difficult to see that $T_S$ is a weighted mean of the temperature of the CMB and gas temperature.

UV photons can change the spin temperature because a hydrogen atom in the lowest state, n=1 (if you are familiar with chemistry, a s state) with antiparallel spins, can absorb an UV photon and jump in a p (n=2) state, and then fall again in a s state but with parallel spins. This mechanism is known as Wouthuysen–Field coupling.

Before the emission takes place, the gas is at the same temperature of the CMB and both are equal to spin temperature, so the relative brightness temperature is zero. When Lyman alpha emission begins the spin temperature decreases resulting in the observed absorption peak. At some point the peak stops because the first stars emit X-rays and the gas becomes hotter than the background radiation.

Guiseppe Rossi's answer is excellent; I just want to add why the mentioned UV radiation modifies the spectrum of the background radiation.

(one word took the other, and it became a rather long comment.)

Neutral hydrogen in its ground state can be in two different configurations; either the proton and the electron may have parallel spins ($\uparrow\uparrow$), or they may have antiparallel spins ($\uparrow\downarrow$). When the spins are parallel, the atom has a slightly higher energy than when they're antiparallel. The atoms "wants" to make a spin flip to the lower energy configuration$^\dagger$, and will eventually do so, but since the line is forbidden, the lifetime of the parallel state is of the order $10^7\,\mathrm{yr}$.

In thermal equilibrium, the spin temperature is equal to the "real", kinetic temperature. Just after decoupling of the radiation from matter at a redshift of $z\simeq1100$, the gas and the photons share the same energy, and since $T\gg 1$, we have that $n_1/n_0 \simeq 3$. But when the first stars begin to shine, they produce massive amounts of hard UV radiation which ionizes their surrounding medium. The ionized gas quickly recombines (in the beginning, at least), with $\sim2/3$ of the recombinations resulting in the emission of a Lyman $\alpha$ photon, i.e. a photon with an energy corresponding to the energy difference between the first excited state (one of the three $2P$ states) and the ground state (the $1S$ state) of the hydrogen atom (10.2 eV).

The Ly$\alpha$ photons scatter multiple times on the neutral hydrogen. Each scattering excites an atom from $1S\rightarrow 2P$, which subsequently de-excites and emits an Ly$\alpha$ photon in another direction. But since the energy difference between the $2P$ and the $1S$ state is a million times larger than between the hyperfine states, there is equal chance of ending in the $\uparrow\uparrow$ and the $\uparrow\downarrow$ state.

(In eq. \ref{b}, $\delta$, $x_\mathrm{HI}(z)$, $\Omega_\mathrm{b}$, $\Omega_\mathrm{m}$, and $h$, are the local overdensity, the neutral fraction of hydrogen, the baryon and matter density parameter, and the dimensionless (reduced) Hubble constant, respectively, but this is of less importance.)

Now the big question is, according to eq. \ref{b} the dip should be of the order a few tens of mK, but is in fact roughly 0.5 K, i.e. an order of magnitude larger. One possible mechanism that could produce this effect is coupling of the gas with dark matter, something which is not usually considered possible but could happen if the dark matter particle has a very small charge (Barkana et al. 2018).

Time evolution of the 21 cm signal

The figure below (from a great review by Pritchard & Loeb 2012) shows how the 21 cm signal evolves with time. The dip discussed in this answer is the orange and red part. 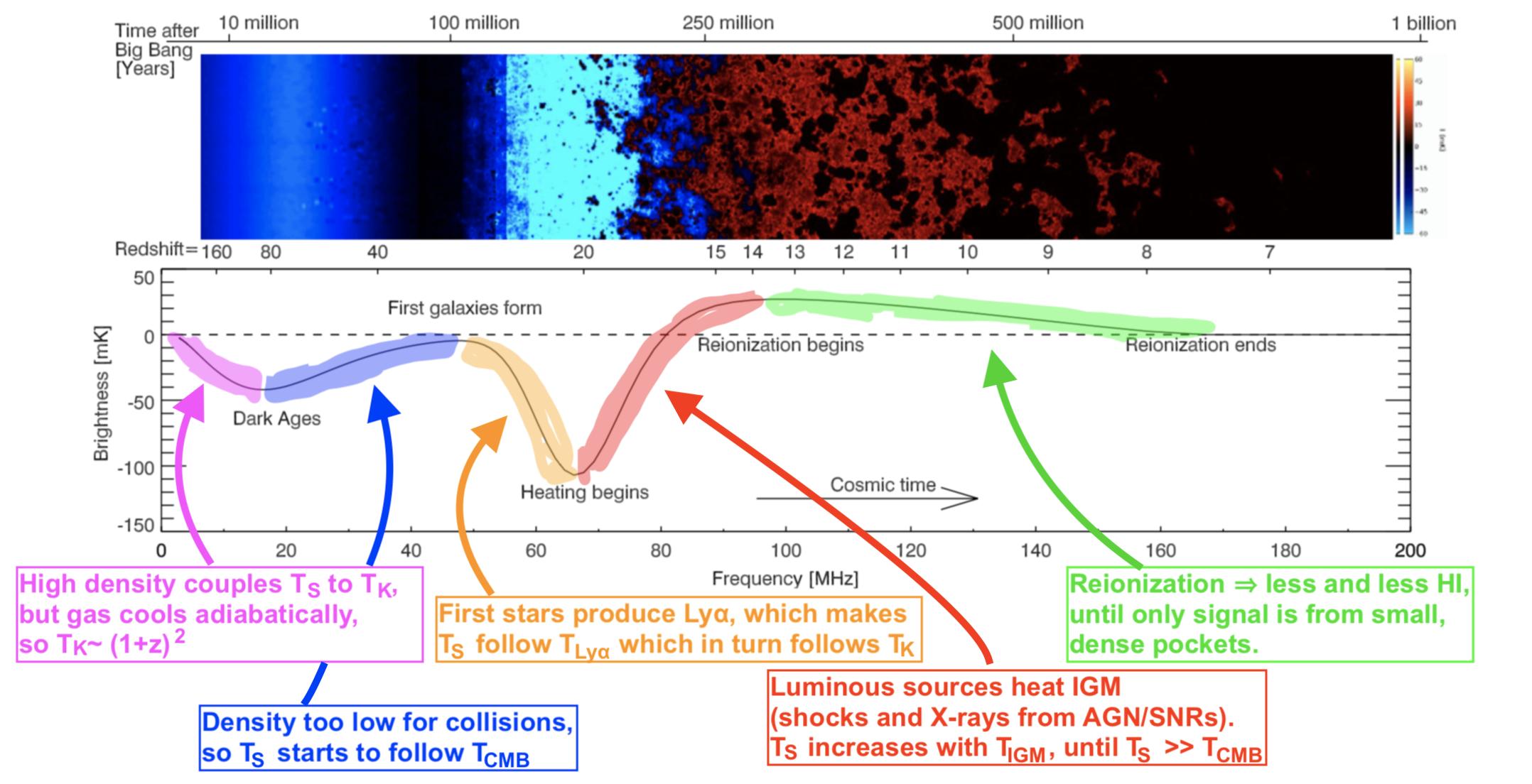 $^\dagger$An analogy would be two magnets aligned parallel to each other with north in the same direction, preferring to flip around, but note Ken G's comment below; the transition doesn't necessarily involve a spin flip, and the analogy is not to be taken literally, since parallel magnets are alike, whereas parallel electrons/protons have opposite charges.

Not the answer you're looking for? Browse other questions tagged cosmology radio-astronomy .

6
Early universe's first starlight (indirectly) detected for the first time, could it have been detectable with 1970's technology?

0
How is it possible that the CMB approaches the earth from all directions?
6
How to know that the 21cm Hydrogen line is the actual emission and not any other redshifted line?
8
How did the object CO-0.40-0.22 get its name, and how is it distinct from CO-0.40-0.22*?
6
Early universe's first starlight (indirectly) detected for the first time, could it have been detectable with 1970's technology?
4
How is it determined that the X-ray and radio intensity come from a magnetic field bridge between two clusters of galaxies?
3
What exactly did ALMA observe at 20 AU from the "Mega Comet Arriving From the Oort Cloud" that will pass in 2031?