I'm having a hard time understanding why there would be this ambiguity. Also, why would this be not the case if the planet was viewed pole on?

Edit: "North South ambiguity" is a term used in a paper that seemed most concise but I guess not. When using radar to doppler image a planetary surface which happens to be viewed equator on, we have no way of distinguishing whether the surface feature read in return signal belongs to the northern or southern hemisphere. What causes this?

It's a great question!

Delay-Doppler imaging is a technique to produce a kind of image that represents the topography of a rotating body, usually when it is so far away that there's no way to resolve the object with traditional imaging, radar or optical.

A powerful radar signal is sent from Earth to an asteroid or a planet, and the reflected signal returning to Earth is recorded and analyzed. The "special sauce" that allows the technique to work is the pseudo-random sequence encoded into the modulation of the outgoing signal. Using correlation techniques, one can extract reflected components from a range of different delays due to different distances to each part of the planet, and different Doppler shifts due to different projected (radial) velocities of each part of the planet.

The raw data is pretty messy, but after you record the body rotating a substantial fraction of a full turn, using modeling, you can recover a reconstructed image of the planet's topography.

The hard part is that while Doppler shift gives you east-west discrimination since one side moves towards you while the other moves away from you (assuming the rotation axis is "up-down"), there's no easy way to tell the difference between the two hemispheres in the reflected signal.

Thus the north-south ambiguity means that there is no temporal difference between a signal reflected from upper hemisphere and the lower. Say at 50 degrees North and 50 degrees South. The signals would have BOTH the same delay (since they are the same distance away) and the same doppler shift (since they are both rotating at the same speed.

Remember that for a spherical-like object of radius R who's axis is perpendicular to us, the projected line-of-sight (radial) velocity will be:

where $T$ is the period, $\phi$ is the latitude and $\lambda$ is the longitude. It's symmetrical about the equator (cosine behavior) but it varies monotonically east-west (sine). 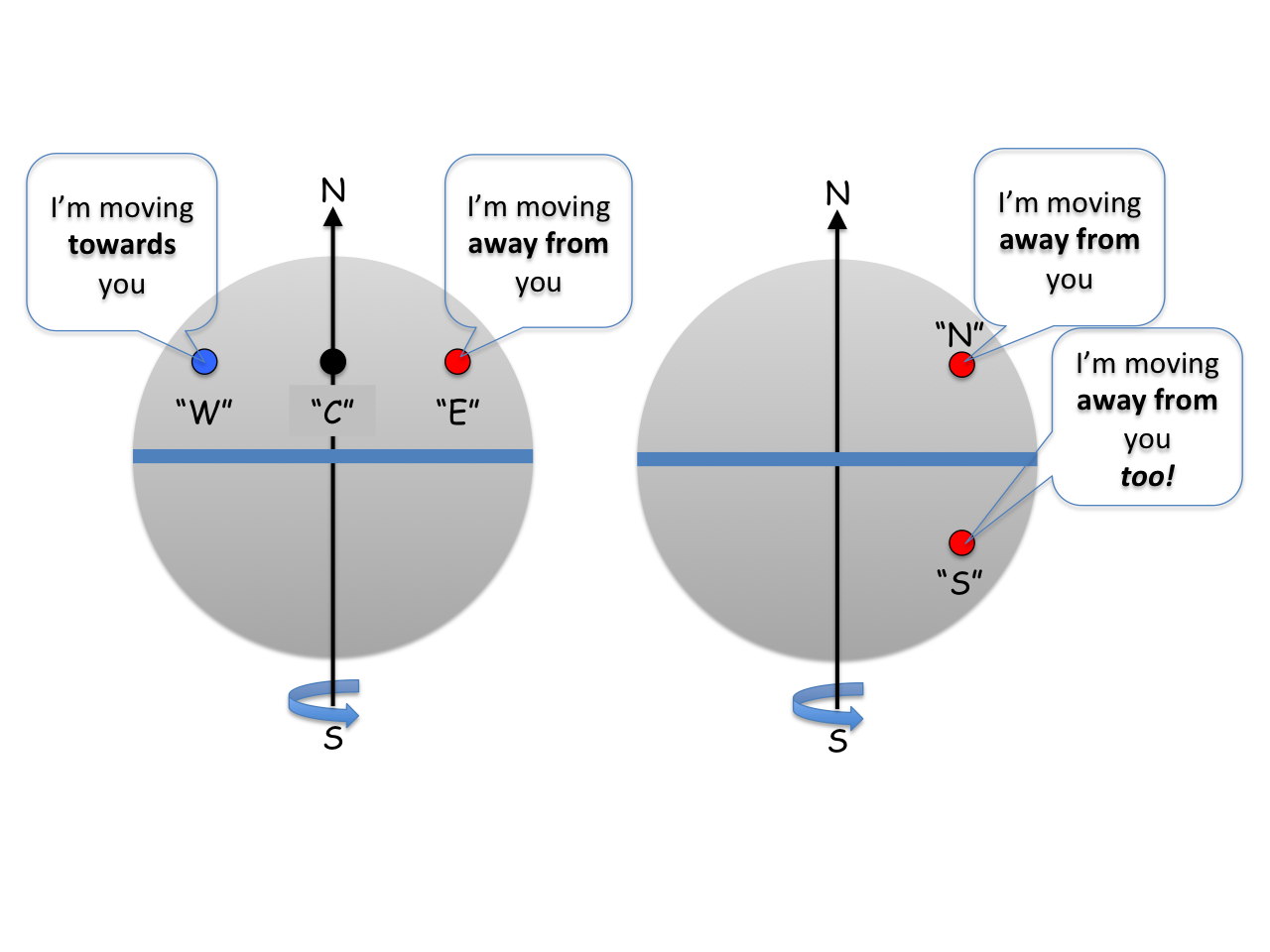 There are solutions to this if the object is large enough though. If you have a huge dish and the object has an angular size on the same scale as the beam width of your dish, you can record data with the beam illuminating first one hemisphere more strongly, then the other. That provides some additional information, and with subtraction and sufficient modeling one can overcome the North-South ambiguity.

Of course, if the body's rotation axis is oriented obliquely towards or away from us, then the symmetry is broken and the ambiguity can also be resolved in some cases.

Not the answer you're looking for? Browse other questions tagged observational-astronomy planet radio-astronomy radar .

12
How did Arecibo detect methane lakes on Titan, and image Saturn's rings?
3
How do astronomers convert radio signals received by their antenna to images?
3
Which techniques are used to convert radio signals received by antenna to images?
3
What is the physical geometry of this apparent "eclipse" of a tiny moon of Asteroid Florence?
2
Is radar interferometry used, or feasible, for ground based astronomy?
3
Current topics on Radio Astronomy and looking for advice

2
On a log-log plot of surface gravity to planet mass, what is the meaning of the y-intercept?
3
Is there a way to tell what the surface of a planet is like?
1
What causes celestial bodies to move like they do from Earth's surface?
2
"Mysterious radio signals" - how could a geostationary satellite and Ross-128 line up with Arecibo?
4
Altitude of Midnight Satellite?
3
We are in Green Lake, WI, 8/12/18, seeing bright orange “planet”/“star” almost due South, perhaps 20 degrees above horizon, what is it?