First, though, in response to

Or has it already undergone supernova explosion?

White dwarfs are not formed from supernovae, but from stars that (relatively) gently shed their outer layers to form planetary nebulae. So no, the stellar remnant will not have gone supernova already.

Back to the main question. If a white dwarf exists, its mass is less than the Chandrasekhar limit. To surpass that, it needs to gain mass. This can happen in binary systems where the white dwarf accretes matter from the more massive star (generally a giant). The white dwarf can then undergo a Type Ia supernova and explode. The light curve will look a bit like this: 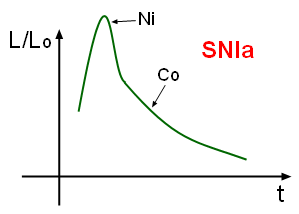 A second (but far less likely) scenario is that two white dwarfs merge. The result? A Type Ia supernova and, possibly, a neutron star.

Consider a 1.6 solar mass that is not a member of a multiple star system. Even though this star's total mass exceeds the Chandrasekhar limit, this star will never go supernova. This star will instead live for billions of year on the main sequence, then a bit longer as a post-main sequence star, and finally end it's life as a white dwarf with considerably less mass than that original 1.6 solar masses (and considerably less than Chandrasekhar limit).

The star leaves the main sequence when it burns all of the hydrogen in its core. Two things happen at this point. One is that it starts burning hydrogen in a shell around an inert core of helium. The other is that it expands into a red giant. (Note: Some people are taught that a star becomes a red giant when it starts burning helium. This is not the case. This post-main sequence star is a red giant that is not yet burning helium.)

That inert core of helium increases in mass as hydrogen shell burning proceeds. A funny thing begins to happen with this increase in mass: The inert core becomes degenerate. An even funnier thing happens next: Adding even more mass makes the degenerate core shrink in size. The star is poised on the next phase of its evolution, which is helium burning. The formerly inert, degenerate core of helium is no longer inert or degenerate at this stage. Think of this phase of a star's life as a main sequence helium burning star. It's definitely not on the main sequence, but much of the physics is the same. One thing that is different: The shell burning of hydrogen is still occurring.

These end of life convulsions are not good for the stuff that surrounds the shell of fusing hydrogen. The star expels a lot of that gas into nearby space. Eventually it will expel most of the burning shells of hydrogen and helium, leaving an inert, degenerate core of mostly carbon and oxygen. This is a white dwarf. A planetary nebula of expelled gases surrounds the white dwarf. The white dwarf itself has but a fraction of the star's initial mass. Most of the mass is in that planetary nebula.

Larger stars are even more proficient at expelling mass than was this 1.6 solar mass star. For stars with an initial mass of about eight solar masses or less, the white dwarfs left behind at the end of the stars' lives will be less than the Chandrasekhar limit.

The fate of stars over ten solar masses is much more violent. At the end of their lives, they have lurking inside them a series of burning shells that surround an inert, degenerate core of iron. A star has about five days to live once that core of iron starts forming. That's about how long it takes to create (from scratch) a degenerate iron core that approaches the Chandrasekhar limit. At or near the limit, the core starts to collapse, and the star forms a type II supernova.

Not the answer you're looking for? Browse other questions tagged star supernova explosion or ask your own question.

3
Sun from SuperNova
3
Do heavier elements breakdown during supernova?
4
How massive does a main sequence star need to be to go type 1 supernova?
1
How to form Copper from Calcium in a supernova explosion?
33
Are there observable changes in a star about to become supernova, minutes or hours before the explosion?
5
Supernova in Hertzsprung–Russell diagram
8
Is it possible to predict a supernova with years or decades of advanced notice?
9
Why does matter stay collapsed in the core, following a supernova explosion?
6
Proxima as Supernova
5
When Betelgeuse goes supernova, will the explosion hit any neighboring stars?