Are stars beyond the asteroid belt less constant?

I added the arrows to illustrate the question. 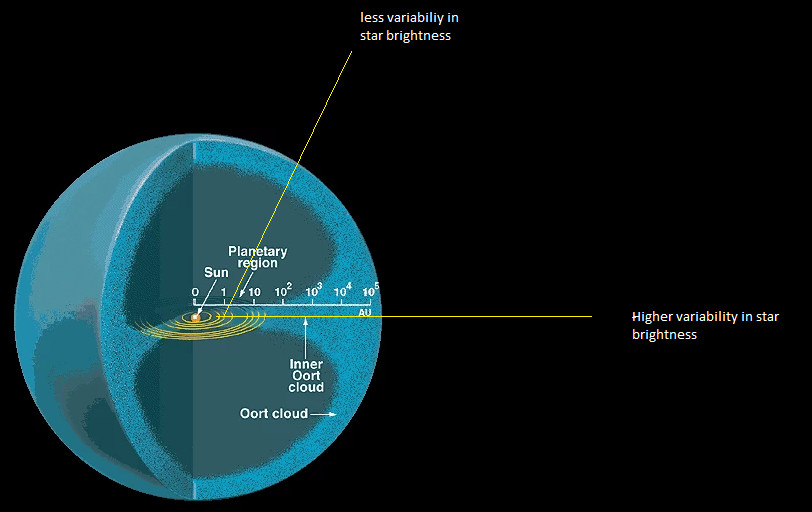 No, stars that are seen through the asteroid belt are not any more variable than stars in any other part of the sky.

All stars vary in brightness on measurable timescales, although some have been measured to have such small variations that they are recorded as "standard" stars and for most purposes can be considered to have a constant brightness and thus be used as reference for other brightness measurements.

What you are referring to, as noted, are occultations. There are many hundreds of thousands of known asteroids in our Solar System, and billions of stars in our galaxy, and so there could be hundreds of predicted occultation events every day, and there are many people interested in occultation events. For one thing, we can calculate the distance and speed of an asteroid quite accurately but we can't directly photograph it to determine its size. But when an asteroid passes in front of a star, we can measure the duration of the occultation and set precise limits on its size.

But for all the asteroids in the Main Belt, the space between them is huge and for any one star the chances of an occultation are quite (vanishingly) small, so the stars seen through the asteroid belt are not any more variable than anywhere else in the sky.

Not the answer you're looking for? Browse other questions tagged star asteroids apparent-magnitude variable-star or ask your own question.

18
Why haven't Earth and Venus got any tiny moons? Or have they?
4
Accuracy of Laplace Method for determining orbital elements
4
In 31.5kyr, Epsilon Eridani and Luyten 726-8 will be < 1ly close; but how distant from the Solar system?
5
Which measurements have shown that 2014 MU69 is red? (New Horizons' next target)
9
How is the total mass of all the Solar System's small asteroids and meteoroids estimated?
3
What causes these asteroid trails to be so strangely shaped and repeated?
3
Has a near earth object in heliocentric orbit ever been bright enough to be visible to the unaided eye?
2
Why doesn't star size distribution conform to space rock size distribution?