Why is T-Tauri So Dim?

I'm looking at stellar objects and doing some math here and...

Now, I can't find these values directly listed, but from it's relative magnitude and distance, (10.27, 471ly,) I calculate T-Tauri to have an absolute magnitude of 4.47, and when I convert that to solar luminosities I get 1.39.

I've run that on objects for which I can find absolute magnitudes and solar luminosities listed, and I'm getting the correct values.

But every description of T-Tauri stars I find says they are brighter than main sequence stars of equivalent mass. A main-sequence star about twice the mass of the sun should be much more than 1.39 times the brightness of the sun.

Now I must turn to people who actually know something about astronomy: Is the prototype T-Tauri star "weird" in some way, and not actually typical of the class of objects that were named after it, or do I have some bad math or bad data here? What else could be the problem?

According to Herczeg & Hillenbrand (2014) the intrinsic bolometric luminosity of T Tau is about $7L_\odot$ (for an assumed distance of 479 light years).

The main difference between their estimate and yours is that they have: (i) Taken account of extinction towards the object, which considerably dims its visible flux by about 1.25 magnitudes (a factor of 3.2). (ii) Taken account of the spectral energy distribution, which differs from the Sun.

You cannot in general calculate a ratio of luminosities from a difference in visual magnitudes, unless the spectral energy distributions of the two sources are the same. T Tau has a greater proportion of its flux emerging at near infrared wavelengths than the Sun.

T Tau is in a multiple system with a much lower mass companion (which contributes little to the luminosity), but this has led to a quite accurate mass determination of $(2.12 \pm 0.10)\ M_\odot$ (Kohler et al. 2015). Given a main-sequence mass-luminosity trend of around $L \sim M^3$, then it is apparent that T Tau has around the luminosity it would be expected to have on the main sequence. This would suggest that it has finished descending its Hayashi track in the HR diagram and is currently traversing, roughly horizontally, towards hotter temperatures and slightly rising luminosity, in excellent accordance with stellar evolutionary models (see below) if its age is $\sim 2$ Myr.

T Tau is only unsusual compared with most "T-Tauri stars" in that it has quite a high mass. Most "T-Tauri stars" are a solar mass or lower, and if found in young stellar clusters and associations with ages $<10$ Myr, you can see from the plot below that they would have higher luminosities than they end up with on the main sequence. 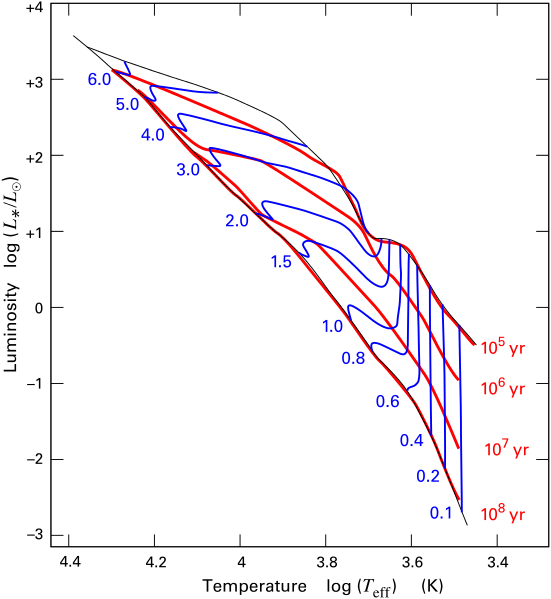 Not the answer you're looking for? Browse other questions tagged star brightness or ask your own question.

0
Putting mass-luminosity relation and Hertzsprung-Russel diagrams together leads us to a mass-age relation; so how do stars lose their mass over time?
6
Accurate way to programmatically generate a main sequence star?
3
What's an order-of-magnitude main sequence star look like?
6
Requesting book references for a non-expert person with math background or just a non-expert person
3
Why do pre-main sequence stars show lithium in absorption?
3
Calculating star radius from temperature and absolute magnitude - what am I missing?
3
Estimating a star's radius, temperature, and luminosity based on its mass
8
The colour of blue dwarf stars