Are the bright dots in this image individual stars?

I saw this picture of M51 (Whirlpool galaxy) and noticed many, many bright dots around and in the galaxy. I have freehand-circled a few as examples. Are these individual stars (probably supergiants) in the Whirlpool Galaxy, or are they clusters, stars in the Milky Way, or something else? 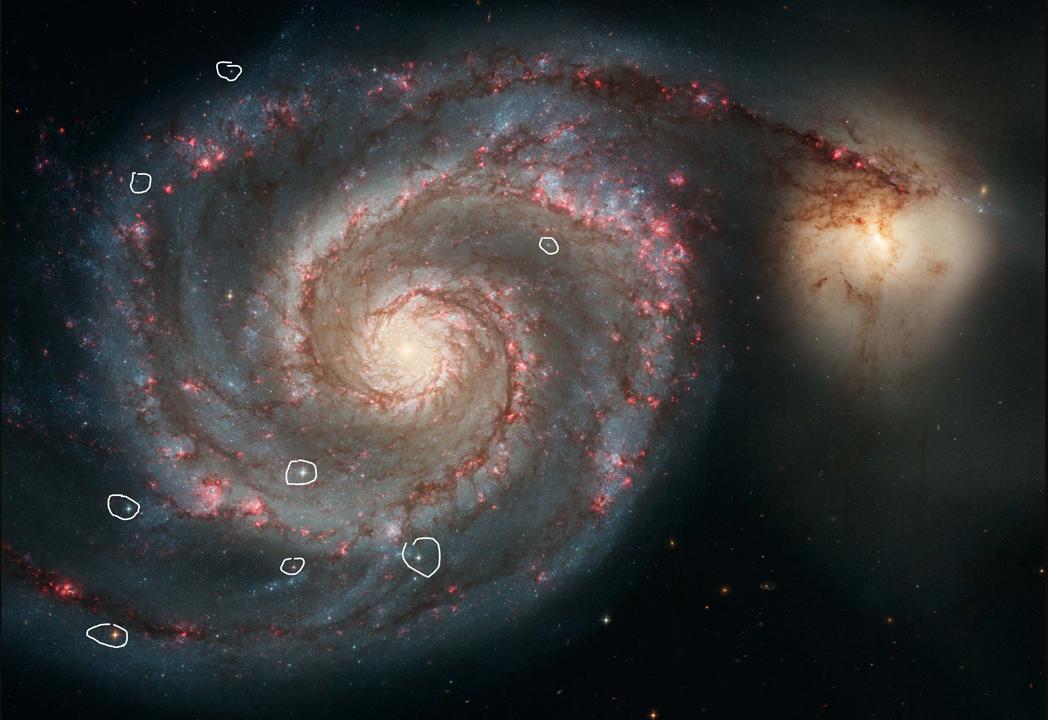 A query to the Gaia Archive within 6 arc min of target name M51 finds 20 sources with phot_g_mean_mag <= 17. Aladin Lite helps to locate them visually. Five are circled in the lower half of the image in question:

These parallaxes indicate distances between 113 and 1600 parsecs, well within the Milky Way.

Of the three sources circled in the upper half, two seem to be listed in Gaia EDR3 but do not have good parallaxes there. Aladin Lite shows SIMBAD matches near all three in Hwang and Lee 2008, a catalog of 2200 star clusters in M51.

Not the answer you're looking for? Browse other questions tagged star galaxy milky-way identify-this-object nebula or ask your own question.

9
What is the scale of things you can see with gravitational lensing?
6
Can we see the stars at the edge of the Milkyway?
2
Do we see stars from other galaxies (not Milky way) in the night sky with the naked eye?
6
The formation of new stars as depicted in Feynman's lectures
9
Why the blank wedges in this very early 21 cm map of the Milky Way? (Oort et al. 1958)
4
Stellar nurseries in the “Shedding New Light on the Whirlpool Galaxy” video
2
More recent data and simulations of “Milkomeda”, the collision of the Milky Way and Andromeda galaxies?
3
How co-planar and co-rotatory are the Milky Way and its constituents?